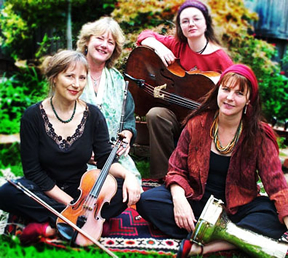 Silkweed was conceived for what was to be a one-off performance at the Cygnet folk festival in 2002 with the creation of our first multi-media presentation "From the Diaspora to a place in the Heart" playing to a packed house.

The glorious collaboration of strings - cello and violin - vocals, keyboard and flute, ensured that the quartet continue their popular association.

In Silkweed , strings, keyboard, flute and vocals weave and merge to create a sound described at one festival as ‘silken magic'. The band was formed from several previous collaborations... Erin and Susan in "Moon Muses", Erin and Anna in "Bandecoute" and Marjorie and Erin in "Saltarello", and continuing with "Czardas"

At one time band members were living in four different locations in three states! These days things are somewhat simpler with only Susan as an occaisonal Tasmanian (other times she resides in NSW and emails music files a lot!)

"From the Diaspora to a place in the Heart" has been performed at Festivals and select concerts including benefits for refugees and for Amnesty International.

Silkweed then developed a musical, narrative and visual history of Maria Island on the East Coast of Tasmania. “Maria-- Island of Dreams” was enthusiastically received at performances around Hobart and regional Tasmania, culminating in performances at the 2007 Ten Days on the Island Festival.

Following the Success of "Maria-Island of Dreams" Silkweed were funded to develop a show based on the history of Jane Franklin. "Jane Franklin-An examined Life" was featured at the 2008 and 2010 Cygnet Folk Festivals, the National Folk Festival, Junction Arts Festival and a Regional Arts tour in 2010.

Silkweed were then awarded funding to write "Letters from a Broken Heart" based on letters written by Erin's father in Japenese POW camps and also from asylum seekers in Australian detention centres.This was premiered at the 2012 Cygnet Folk Festival, and follwed with performances at UTAS, the National Folk Festival and Rosny Barn.

Silkweed are about to launch "Fire" for the 2017 season of Ten Days on the Island, commemorating the 50th anniversary of the 1967 bushfires, one of the worst natural disasters in Australian history.

A graduate of the Sydney Conservatorium of Music, Susan has worked in numerous musical ensembles, currently including “Zanuba” a Middle Eastern quintet and “Silkweed”, and has performed in numerous commercial venues and at music festivals around the country.

Susan has worked with Erin in a multitude of ventures over the past 15 years. She is a professional music teacher and has also completed a music production course at Southern Cross University.

Susan also spent over ten years as the resident musician in a Playback theatre ensemble in NSW. 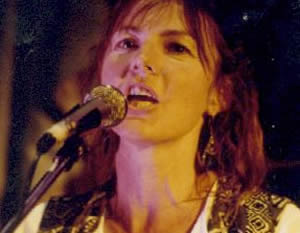 Erin has been involved in producing and performing in collaborative music and drama projects for many years, in addition to performing as lead singer in several bands in a variety of genre.

Erin can compose and perform both written and musical works for specialist events. For example writing and performing a song for the opening of the new interpretation centre of the at the Richmond gaol, opened by the then Tasmanian minister for the Arts, Paula Wreidt. More recently she and Susan McGowan wrote and recorded a CD companion based on the poetry in Rosa Vasseighi's book "Where is the Justice?"

Previous collaborative works with Susan McGowan have spanned almost two decades and include “Moon Muses” (NSW); a performance piece involving original music, dance and artwork, “Extremities” a contemporary flamenco dance piece with original music, with Silkweed, “From the Diaspora to a Place in the Heart”, a live performance of songs and music with a visual presentation, various music and video installations, and “Maria, Island of Dreams”and most recently "Jane Franklin-an examined Life." Her favorite place as a singer is between Anna and Marjorie (ie between the cello and violin.....bliss!)

Erin has also been involved in multiple professional performance pieces in Queensland and Victoria working with organisations such as the Queensland Folk Federation, The Boite World Music Cafe, and Arts Victoria. These include: 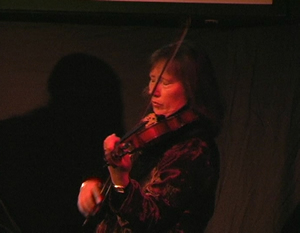 A graduate of the Tasmanian Conservatorium of Music, Marjorie is the director of Valley Strings Music School (Huon Valley) and also runs a private music studio in Hobart. She has been the principal writer for two of Silkweed's shows: Jane Franklin-An Examined Life" and most recently, "Fire"

The Heritage Fiddle Ensemble was specifically formed to showcase music recently collected by Marjorie and her husband Steve with the aim of reinvigorating the music scene with traditional and contemporary Tasmanian music.

The ensemble consists of a few adult players with a group of young people aged from 10 to 18 yrs and was selected to represent Tasmania at the 2005 National Folk Festival and to open the 2005 programme for 10 Days On The Island.

Marjorie has played in a multitude of ensembles including,

Marjorie is currently working on the second edition of Eureka; her highly successful teaching manual for violin

Marjorie has performed at numerous festivals and music venues, including; Anna completed B.Music Hons in performance and musicology (UTas) in 1995. She freelanced professionally for a number of years a great strength being her ability to improvise and perform in a variety of styles including classical, contemporary and folk.

As a young classical cellist, Anna toured internationally with the Australian Youth Orchestra.

Anna has performed locally, nationally and internationally as both instrumentalist and vocalist; with numerous groups in various styles, most recently including Kazakstan Kowgirls and Recherche Baybes as well as Silkweed; and is regularly called upon as a session cellist as well as for festivals and benefits.